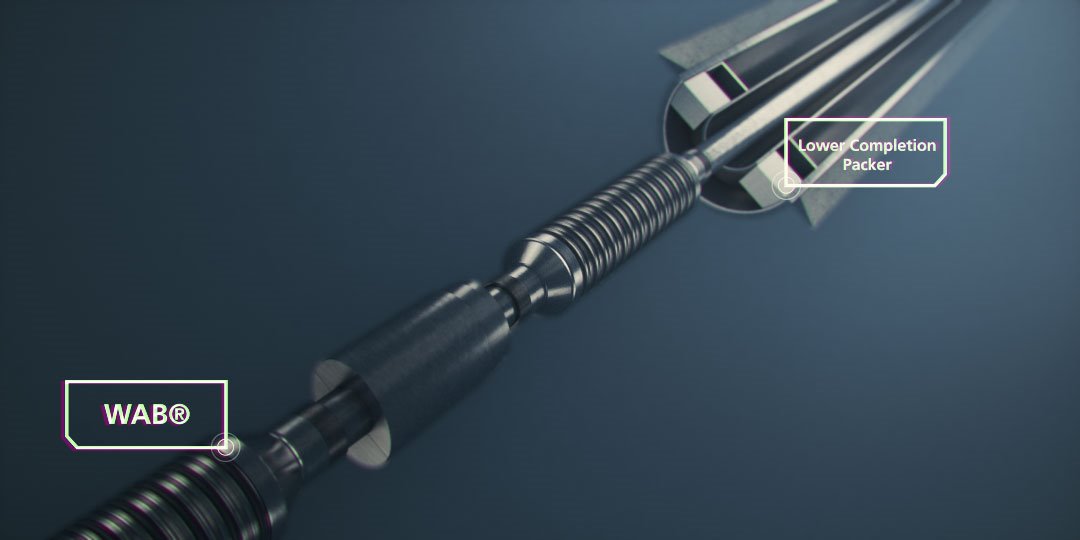 In a multi-zone well design, it is possible to run a 12-1/4” open hole (OH) completion with 9-7/8” production casing instead of an 8-1/2” OH with 7” liner. Using the larger completion and casing allows for the use of wider Intelligent Well Completion equipment, which benefits high-productivity wells that are also likely to incur future scale buildup. However, reservoir uncertainties and limited data can make it difficult to predict the number of zones to be drilled. When these uncertainties regarding final number of zones are considerable, the approach is to drill into the reservoir with a 12-1/4” bit and set and cement a 9 7/8” production casing, but if only a single zone is found, then additional expenses are incurred due to compatibility issues between single and dual-zone well design.
Additionally, for this particular case, severe loss scenarios made it challenging for initial intelligent completion designs as they were not compatible with the managed pressure drilling (MPD) techniques being used to drill the well. These older designs also did not provide separation between the upper and lower completions, and no disconnection element existed to allow for upper completion retrieval.

Two 812WAB for Zonal Isolation were mounted on a 6-5/8” casing liner. A 7-5/8” liner set above the top WAB, and a 5-1/2” liner running down to the formation isolation valve (FIV) set below the lower WAB, which then crossed over to a 6-5/8” pre-perforated liner across the lower reservoir. The assembly was run into the well, which had a total depth of approximately 17,060 ft (5,200 m). The unique ability to rotate, circulate, and work the completion string down enabled Petrobras to configure the AWA system in this way.

A 758 Welltec® Flow Valve (WFV) was installed on the 7-5/8” liner and run in the closed position, thus isolating the entire system, which is V3 qualified. The liner hanger was set and the WABs expanded—utilizing the inner string seal and seal bore—via surface control, in a fast and controlled manner into the 8 1/2” OH, providing life-of-well zonal isolation within the carbonate reservoir.

The liner was then pressure tested to 2,000 psi against the 758WFV and the FIV, providing primary well barrier integrity. Together, these two barrier elements provided reservoir isolation during the subsequent deployment of the upper completion, with the WFV opening only during the final stages of landing off the Upper Completion.

With all the elements in place and the seals engaged with the seal bore, losses were only possible down the annulus and were checked with a cup tool configured as a baffle. Once the tubing hanger had set, the FIV was pressure cycled open, and a zonal acid stimulation was completed via the ICV and ball valve. During the acid stimulation, the WAB sealing was confirmed using the ICV pressure gauges.

Using the AWA system, Petrobras were able to tailor their completion design as per their required specification and gain a number of benefits.

The Open Hole Intelligent Completion applied with the AWA system enabled operational flexibility and equipment standardization. The same drilling design could be used for either a single or multi-zone completion, allowing the client to optimize the completion design based on reservoir data gathered during the drilling and logging phase.

The workover complexity was also minimized due to the MPD compatibility when using the separated lower completion. The reservoir is isolated when the intelligent completion is installed, and the formation can also be re-isolated when retrieving the upper completion for future workover purposes.

When applied to the client completion design, The AWA system also reduces well-construction costs as well as the time needed for drilling and completion. In this case, the directional injection well was constructed in approximately 15 days less than the most recent configuration well (including drilling and completion). In a more complex five-phase well scenario, the savings would be in the excess of 25 days.

In addition, there are a number of important environmental benefits of deploying the AWA system which are a direct result of eliminating the need to cement the reservoir section.
Petrobras were able to reduce the amount of cement required for the well construction which in turn means reduced CO2 emissions through:
• Minimizing the weight of rig supply boats burning fuel
• Decreasing risks of cement spills in open water
• Reducing cement cleanout in rig piping systems
• Eliminating cleanout of contaminated tanks and pits
• Removing the need to ship contaminated water back to shore
• Reducing of overall volume of cement that needs to be mixed and pumped.